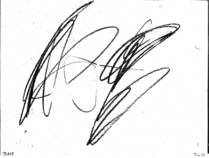 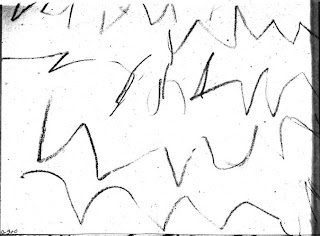 What follows is amazing.


"In 1967, Rhoda Kellogg published an archive of c. 8000 drawings of children ages 24-40 months. (See Kellogg, R.: Rhoda Kellogg Child Art Collection. Washington, DC., Microcard Editions, Inc., 1967; now available at LexisNexis, Reed Elsevier, Inc..) Up to now, as far as we know, no other archive of early graphic expressions was ever published, including a large sample of pictures and presented according to a classification system. Thus, the archive has a historical status.

Rhoda Kellogg was a psychologist and a nursery school educator. Here investigations focused on the art of young children, that is, on early graphic expressions. From 1948 to 1966, she collected approximately one million drawings of young children of ages two to eight. More than half a million of these drawings are filed in the «Rhoda Kellogg Child Art Collection of the Golden Gate Kindergarten Association» in San Francisco, U.S.A.. Of these half-million and more drawings, some 8’000 are available, in microfiche form (see above). Some 250 paintings and drawings, selected as outstanding examples of children’s work, are reproduced in full color. (See Kellogg, R. and O’Dell, S.: The Psychology of Children’s Art. Del Mar, California, 1967.)

Kellogg describes the very first development of children’s drawings as a sequence of basic shapes or forms and their configurations: starting from twenty «basic scribbles», which can be observed at the age of two, children develop placement patterns, emergent diagram shapes, diagrams, combines, aggregates, mandalas, suns, radials, before humans and early pictorialism appear. Kellogg understands this sequence as a manifestation of «Gestalts», according to the Gestalt theory.

Kellogg is one of the rare authors who emphasizes the role of formal design, which emerges before pictorialism and then plays a role in relation to pictorialism or is developed as a distinct type of pictures. (That is my own emphasis on this paragraph)

Kellogg is also one of the rare authors who presents an extensive classification system related to early graphic expressions, combined with an attempt to give empirical evidence for the picture attributes of the system and their role in the development of drawing and painting."

If you have a few minutes to be amazed, go to Rhoda Kellogg's website and you can view the amazing collection of children's drawings as well as how she has cataloged /categorized them.

inspiration is all around even where we least expect it

Does Your Home or Office Space Need Some Help?

Picture of the Day

"Yeah, that works..!"
Finger Lakes Region, NY, United States
I believe that everything and everyone in our life are integral to how we shape our surroundings. Inspiration is all around. Though I have formal training in art & design and all the rest, rules are not my guiding principles. Gut feelings are. When something looks or feels "right", I go with it. It all comes down to that basic "Yeah, that works!" moment. Doesn't it? ~ Karen

I am so happy with all the (color) choices! ……Again thank you and I definitely will spread the word of your work. Anytime I have a need you will be my first contact and more than likely my only contact."

I wanted to let you know that we are having a great deal of renewed interest in the home and had some VERY nice comments on the dining room and the noted changes from a realtor that saw it last summer. She could not believe the difference and was VERY complimentary of the design, colors etc. It was not for her client due to the small back yard, but she did notice the upgrades immediately. You went above and beyond and really took a personal dedication to the project, being very sensitive about the seller's need to not spend a lot of money. The suggestions were very upscale, but not expensive and I think it made a huge difference in the presentation of the home.

We have implemented several of your suggestions! Planted flowers in the containers out front. Rearranged the basement furniture and rug. Having the basement ceiling installed today. Removed the wine fridge from the dining room. Removed a leaf from the dining table and placed accent flowers in the dining room. Having a painter come to touch up the inside, repaint the outside door trims, and repaint the shed door. Took the pictures of our family down from the shelves in the family room and replaced with decorative things. And I'm sure I'm forgetting something...

....Your suggestions have been right on the money! Thank you so much.

Once we move into a new home, I'm sure we'll be calling you again!

“My husband and I were ready to spend thousands on new furniture in order to make our living room more accommodating. Then, I saw Karen’s ad for a redesign and thought it was worth a try. Well – let me just say that we are planning on a vacation soon because Karen was able to address our problems without us having to go out and replace our things! Our room looks terrific and now we can have our grandkids over without them fighting over who gets to sit on the couch. Thanks, Karen!” Elaine – Honeoye, NY

“I have to admit I was afraid of your color suggestions as I have always been pretty conservative in that area. I am so glad I followed your advice. It feels like we live in a new house! Even our furniture looks different and new! I never imagined what a huge difference color can make and for so little money. My husband liked that part the best! We have already given out your card to many friends who have admired the change. Thank you ever so much.” Pat – Mendon, NY

“Thank you for helping us with my mother-in-law. It was emotional for all of us having her leave her home of 57 years. Even though she is here in our home, the change has been hard for her. Your caring approach in how you helped us set up her living space made more difference than you know. “ Sally – Conesus, NY

I try my best to give credit for all photos where credit is due. Either the link is embedded in the "source" link or can be viewed by right-clicking and reading the properties description. If you are the owner of a pic that I have used and would prefer it a) be tagged differently or b) not be used at all, then by all means, drop me a friendly (hopefully) line and I will be more than happy to make things right. ~ K