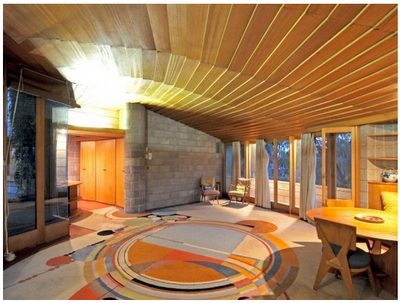 "David & Gladys Wright's house in Arcadia, AZ has long been one of the major sites for the pilgrims of his father, Frank Lloyd Wright. FLW built it for them in 1951 out of concrete block, with Philippine mahogany built-ins and all the furniture, from the beds to the kitchen garbage can, to the massive, custom-fitted, abstract rug [above].

It's pretty spectacular, as far as rugs go. The design is apparently based on some early bubbly murals from the 1920s. The wall-to-curved-wall shape is so odd, you'd be tempted to leave it as is, floating in your even larger space. But actually, what you'd really be tempted to do is to cut it down to something more "manageable" that "works" in your [obviously architecturally inferior] space.

At which point you'd better hope the Cult of Wright doesn't have fatwahs or voodoo dolls or anything, because they would be even more pissed than they already are."


For more info: Read what the guy at the auction house has to say.

What do you think? Should historically significant pieces of art, architecture, and history be sold off in bits and pieces like this?
Posted by "Yeah, that works..!" at 2:02 PM

I LOVE that rug!! It reminds me of an Indian headdress. Since it is privately owned the new owner could do whatever they wanted with it & the purchaser could do the same. (although anyone who takes carpet cutters to that beauty will have to answer to me!) I think the only hope for this particular piece is if FLW devotees were to purchase it. Oh, there's that bottom line again - money !! The (almost) same thing is happening to my old neighborhood church in a suburb of Cleveland. To my eye, it is stunningly beautiful but it will be closed forever in 3 months. If a thing of beauty exists but no one sees it...........

Hi, Karen.
I guess that depends on what the new owner plans on doing with the home. In my opinion, if the new owner doesn't like the rug...and is going to be living in the space, then it needs to go! If the home is/was to be simply an historical building celebrating Wright's work, then that's a different story. Hey - at least it's being auctioned off and not tossed into a landfill!

I agree with both of you. And as the auction house guy states, when a piece is auctioned off, then value is determined for that piece as well as record of who purchases it and where it ends up.

inspiration is all around even where we least expect it

Does Your Home or Office Space Need Some Help?

Picture of the Day

"Yeah, that works..!"
Finger Lakes Region, NY, United States
I believe that everything and everyone in our life are integral to how we shape our surroundings. Inspiration is all around. Though I have formal training in art & design and all the rest, rules are not my guiding principles. Gut feelings are. When something looks or feels "right", I go with it. It all comes down to that basic "Yeah, that works!" moment. Doesn't it? ~ Karen

I am so happy with all the (color) choices! ……Again thank you and I definitely will spread the word of your work. Anytime I have a need you will be my first contact and more than likely my only contact."

I wanted to let you know that we are having a great deal of renewed interest in the home and had some VERY nice comments on the dining room and the noted changes from a realtor that saw it last summer. She could not believe the difference and was VERY complimentary of the design, colors etc. It was not for her client due to the small back yard, but she did notice the upgrades immediately. You went above and beyond and really took a personal dedication to the project, being very sensitive about the seller's need to not spend a lot of money. The suggestions were very upscale, but not expensive and I think it made a huge difference in the presentation of the home.

We have implemented several of your suggestions! Planted flowers in the containers out front. Rearranged the basement furniture and rug. Having the basement ceiling installed today. Removed the wine fridge from the dining room. Removed a leaf from the dining table and placed accent flowers in the dining room. Having a painter come to touch up the inside, repaint the outside door trims, and repaint the shed door. Took the pictures of our family down from the shelves in the family room and replaced with decorative things. And I'm sure I'm forgetting something...

....Your suggestions have been right on the money! Thank you so much.

Once we move into a new home, I'm sure we'll be calling you again!

“My husband and I were ready to spend thousands on new furniture in order to make our living room more accommodating. Then, I saw Karen’s ad for a redesign and thought it was worth a try. Well – let me just say that we are planning on a vacation soon because Karen was able to address our problems without us having to go out and replace our things! Our room looks terrific and now we can have our grandkids over without them fighting over who gets to sit on the couch. Thanks, Karen!” Elaine – Honeoye, NY

“I have to admit I was afraid of your color suggestions as I have always been pretty conservative in that area. I am so glad I followed your advice. It feels like we live in a new house! Even our furniture looks different and new! I never imagined what a huge difference color can make and for so little money. My husband liked that part the best! We have already given out your card to many friends who have admired the change. Thank you ever so much.” Pat – Mendon, NY

“Thank you for helping us with my mother-in-law. It was emotional for all of us having her leave her home of 57 years. Even though she is here in our home, the change has been hard for her. Your caring approach in how you helped us set up her living space made more difference than you know. “ Sally – Conesus, NY

I try my best to give credit for all photos where credit is due. Either the link is embedded in the "source" link or can be viewed by right-clicking and reading the properties description. If you are the owner of a pic that I have used and would prefer it a) be tagged differently or b) not be used at all, then by all means, drop me a friendly (hopefully) line and I will be more than happy to make things right. ~ K